Hangzhou is the capital of Zhejiang Province and the local political, economic and cultural center. As the southern terminus of the Grand Canal, the city is located on the lower reaches of the Qiantang River in southeast China, a superior position in the Yangtze Delta and only 112 mi (180 km) from Shanghai.

The subtropical monsoon climate contributes to varied seasonal sceneries, making Hangzhou one of China’s most popular travel destinations all the year round.

The West Lake is undoubtedly the most renowned landmark, noted for the scenic beauty that blends naturally with many famous historical and cultural sites. The “Ten West Lake Prospects” selected from the most frequently visited attractions around the lake give travelers a panoramic view of the city’s highlights. Take a stroll along the causeway by the lake; you’ll feel the peaceful ethos of the city and better understand its time-honored fame as ‘Heaven on Earth’.

Hangzhou is located on the lower reaches of the Qiantang River in southeast China, a superior position in the Yangtze Delta and only 180 kilometers from Shanghai.

♦ The Beijing-Hangzhou Grand Canal is located in Xiacheng District.

♦ In Xiaoshan District, there is Hangzhou Paradise Park, which is suitable for young people or families with children.

Hangzhou has enjoyed a history of over 2,200 years since the county administration was established in Qin Dynasty. It is one of the cradles of Huaxia (China) Civilization. As early as over 5,000 years ago, there were human beings multiplying and living in Hangzhou area, creating Liangzhu Culture known as the Dawn of Civilization. The archaeological discovery of Liangzhu ancient city ruin in 2007 pushed even earlier the recorded history of Hangzhou civilization. Hangzhou, one of the seven ancient capitals of China, was the capital of Wuyu State, of the Five-Dynasties and also the capital of the Southern Song Dynasty. In the 13th century, the Italian traveler Macro Polo admired Hangzhou as “the Most Splendid and Luxurious City in the World”. Hangzhou was called Qiantang in ancient time. In the ninth year of Kaihuang of Sui Dynasty (589), Hangzhou was founded to replace the original Qiantang County and the name of Hangzhou was recorded for the first time in history. The Wuyu State of the Five-Dynasties (907-978) founded capital in Hangzhou. In the third year of Jianyan of Southern Song Dynasty (1129), Emperor Gaozong moved southward to Hangzhou and upgraded it as the site of the prefecture city of Lin’an. In the eighth year of Shaoxing (1138), Lin’an was officially determined as the capital, which lasted more than 140 years.

On May 3, 1949, the People’s Liberation Army entered Hangzhou and the city came under Communist control. After Deng Xiaoping’s reformist policies began in 1978, Hangzhou took advantage of being situated in the Yangtze River Delta to bolster its development. It is now one of China’s most prosperous major cities.

The traffic in Hangzhou is very developed and convenient, by planes, trains or bus. If you are traveling from outside Zhejiang Province, most people choose to take flight or train; if you travel within Zhejiang Province, high-speed or coach would be the most common way.

Hangzhou Xiaoshan International Airport
It takes about 45 minutes from Hangzhou downtown to the airport. There are 3 terminals in the airport. T1 and T3 serve for domestic flights; T2 mainly serves for international flights.
♦ Address: East of Xinjie Town, Xiaoshan District. 27km away from Hangzhou downtown
♦ Tel: 0571-86661234; 0571-86661236
♦ How to get: airport shuttle bus and taxi are the common way to get

Hangzhou Railway Station
It is the main train station in the city. there are trains leaving for different cities in the country. It is not far from the West Lake, only take 10 minutes drive by taxi.
♦ Add: intersection of Xihu Ave. and Huancheng East Road, Shangcheng District
♦ Tel: 0571-87829983

Hangzhou East Railway Station
This train station is takes 29 minutes drive from downtown. There are many high-speed trains leaving for different places.
♦ Add: Jianggan District, you can take Metro Line 1 to get there

At present, Hangzhou has three metro lines in operation, line 1,2 and 4,of which the metro line 1 is most useful to tourists as it links the Coach Center, East Railway Station of Hangzhou and West Lake Cultural Square.

The climate in Hangzhou is Humid Subtropical with four distinctive seasons, characterised by long, very hot, humid summers and short, chilly, cloudy and dry winters (with occasional snow). The average annual temperature is 16.5°C (61.7°F), ranging from 4.3°C (39.7°F) in January to 28.4°C (83.1°F) in July. The city receives an average annual rainfall of 1,450 millimetres (57.1 in) and is affected by the Plum Rains of the Asian Monsoon in June. In late summer (August to September), Hangzhou, along with other cities in Zhejiang province, suffer typhoon storms, but typhoons seldom strike it directly. Generally they make landfall along the southern coast of Zhejiang, and affect Hangzhou with strong winds and stormy rains. During this period, you should bring an umbrella with you. Even if it does not rain, an umbrella is also a nice prop for photos you take at the West Lake. September and October feature excellent weather when clear skies and bracing air can be enjoyed almost every day. In Winter, on the other hand, the city suffers severe cold since most places are not equipped with heating systems. However, Hangzhou is still a tourist capital of China; many travellers pour into the city, their numbers peaking during holidays and weekends.

Spring (April-June): warm and comfortable. In early April, if you are lucky enough, you can see the blooming peach blossom. In spring, the trees turn green and the air is sweet.

Summer (July to September): although the weather is hot and rainy often, but the lotus West Lake bloom during the time period.

Autumn (October to November): Weather is cool and comfortable and the sky a delightful color of amber, with less rain. Qiantang Tide takes place around mid-autumn festival, which looks spectacular.

Winter(December-next March): In winter, the snow falls on the lake creating a picture- postcard atmosphere about the city. Hangzhou’s winters are never absolutely freezing and even in January, which is the coldest month, the average temperature is about 3 degrees centigrade. If you do not mind the cold and want to save money, you’d better travel in winter.

Spring is the best seasons to visit Hangzhou. Colorful blossom, fresh air, green trees along the road and the clean street in drizzle days, Spring is an ideal time for foreign visitors to Hangzhou.

Try to plan your Hangzhou travel to avoid the peak holidays. Because they are popular with Chinese tourists, Hangzhou attractions become more crowded in these periods.

West Lake – a must see place while you are in Hangzhou. It is a large lake with a lot of sites scattering around the lake area, such as The Broken Bridge, Mid-Lake Pavilion, Su Causeway, Bai Causeway, Soliday Hill and Zhongshan Park, Yang Causeway, etc. The blooming season of lotus flower is between July and August, which should be the most beautiful time of the lake. You can take a boat ride in the lake.

Lingyin Temple – one of the 3 oldest and most famous temples in China. There are hundreds of Buddhist stone statues carved into the cliffs in the “Peak Flying from Afar” section next door.

Six Harmonies Pagoda – Besides the pagoda itself, which is arguably the most prominent of all the temples and pagodas in Hangzhou, there is an adjacent park with hundreds of realistic replicas of the world’s most famous pagodas, complete with mini-sized trees in front of the pagoda models.

Longjing Tea Platation – Hangzhou is famous for Longjing tea. Visiting a tea plantation would an impressive trip. You can see the rolling tea trees and the local people who picking tea leaves.

Hefang Street – currently one of the most representative historical and cultural street in Hangzhou. 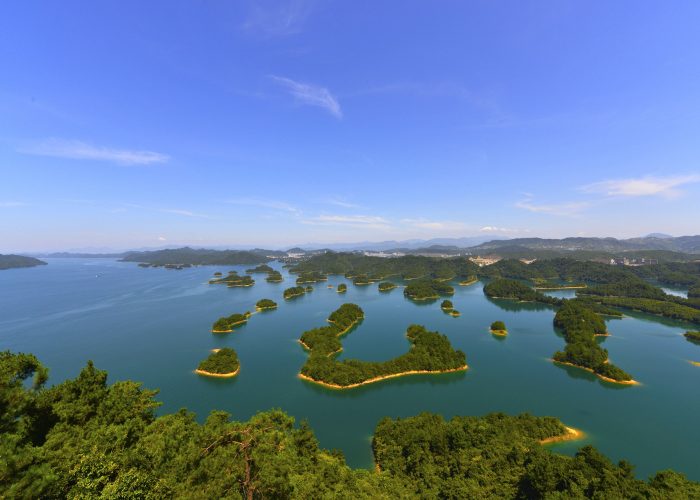 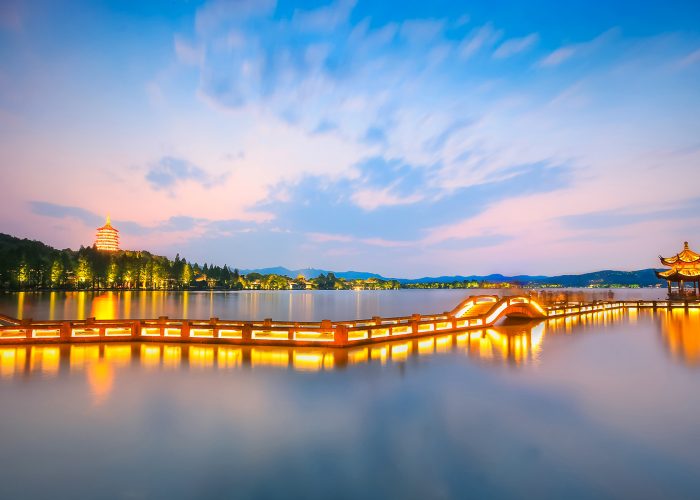 Hangzhou Tours & Tings to Do 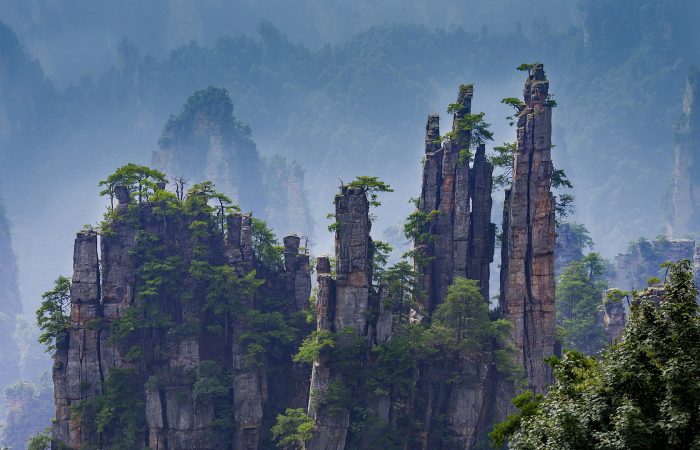