Lingyin Temple is one of the top ten most famous ancient Buddhist monasteries in China, also one of the largest and wealthiest Buddhist temples in China, and contains numerous pagodas and Buddhist grottoes. The temple is sited in north-west of Hangzhou, Zhejiang Province, China. In front of it are the Peak That Flew Here and the Cold Spring. Surrounded the temple are majestic peaks and sky-reaching ancient trees; it is really a tourist attraction that can offer you appealing places of historic interest, cultural relics as well as agreeable natural scenery with woods, flowers, springs, etc.

The monastery was founded at the foot of Lingyin Mountain in 326AD during the Eastern Jin Dynasty by monk Hui Li, who came from India. Master Hui Li (326-334AD), a monk from Western India, was the founding master of Lingyin Temple. He travelled through the central plain to present-day Zhejiang area in the Eastern Jin dynasty. When setting foot on Wulin (Hangzhou), he pondered the presence of a mountain with distinct craggs, “This is a small peak in Lingjiu Mountain of India, when did it arrive here? This looks like a resting place for celestial being at the time of the Buddha… ” For this, he set up a temple before the mountain and named it “Lingyin”. This temple features a main hall extending 33.5 meters in height, a statue of Sakyamuni carved out of 24 pieces of camphor wood and a laughing Buddha covered in gold.

During the later Southern Song Dynasty, the monastery was regarded as one of the ten most important temples of the Chan sect in the Jiangnan region. Emperor Kangxi (1662 – 1723 AD) of the Qing Dynasty, when he came here in a tour of inspection, gave it another name “Yunlin Buddhist Temple”.

The existent temple was rebuilt during the 19th century in late Qing Dynasty. The Hall of Mahavira (great hero) inside the temple is 33.6 meters in height, and the statue of Sakyamuni (563? – 483 BC) in the Hall, was carved out of 24 pieces of camphor wood. In front of the Hall are two pagodas of rock which were built in 960 AD of the Song Dynasty. 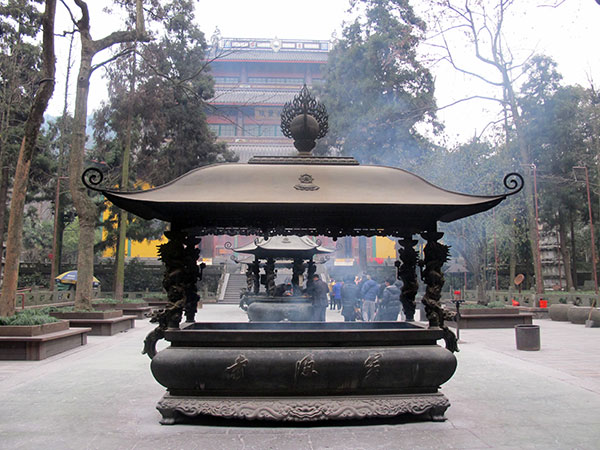 Highlights to Visit in Lingyin Temple

【The Hall of Heavenly Kings】
The Hall of Heavenly Kings is the formal entrance of the temple, with 20 meters long and 15 meters wide. This hall is a double-eaved building. The front of the building carries a plaque (“云林禅寺” in Chinese) written by the Emperor Kangxi Emperor of Qing Dynasty. The principal statue in this hall is that of the Maitreya Buddha in his manifestation as the cloth bag monk, or the Laughing Buddha. At the back, facing up the hill, is the Skanda Bodhisattva, or Weituo as he is known in Chinese. Visitors to the temple are often impressed by the size and majesty of the entrance hall and its statues.

【Hall of Medicine Buddha】
As the third hall in Lingyin Temple, Medicine Buddha Hall is situated behind the Grand Hall. Inside the hall worships the statues of Medicine Buddha, flanked by two Bodhisattvas, Suryaprabha and Candraprabha, symbolizing sunlight and moonlight respectively. Rebuilt in 1993, this hall is a single-layer building with a double-eaved hip roof, which consists of seven rooms extending across the width of the hall and three rooms running the depth of the hall.

【The Grand Hall (Hall of Great Sage)】
The Grand Hall is also known as the Grand Hall of Great Sage or Mahavira Hall. It is separated from the Hall of the Heavenly Kings by a large courtyard. It is triple eaved and stands 33.6 metres tall. It serves as the main temple hall where the statue of Sakyamuni Buddha, whose teachings founded Buddhism, is worshiped. The present statue was carved in 1956 from camphor wood in Tang Dynasty style and coated with 60 taels of gold. It is the largest wooden Buddhist statue in China. 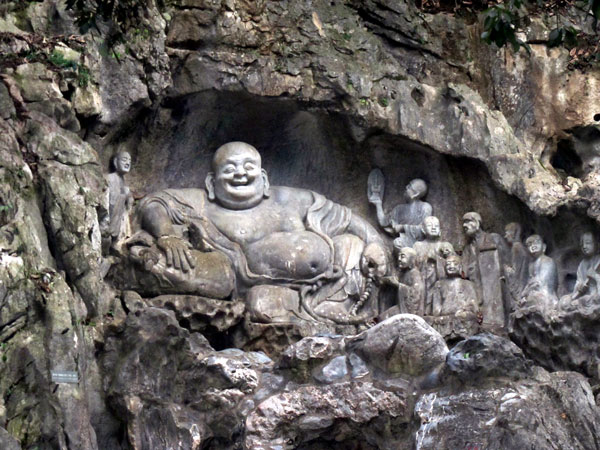 【Hall of Five Hundred Arhats】
Built in late 1990s, Hall of Five Hundred Arhats is currently the largest hall of Arhats in China, , with a total area of 3116 square meters and a height of 25 meters. It was constructed into a double-eaved structure, with overhanging roof and upturned eaves, looking quite magnificent. The hall houses a total of 500 bronze seated statues of Arhats, all cast in American tin bronze. Each statue is 1.7 meters in height, 1.3 meters in width, and about 2000 catties (1 ton) in weight. Their light-bronze-colored body parts are carved into various unique and vivid postures with smooth lines.

How to Get to Lingyin Temple

→ From Hangzhou (XiaoShan) Airport: There is a Shuttle Coach from the airport to Hangzhou Railway Station that leaves approximately every 30-40 minutes. From the trail station there are public buses and taxis available.